Barrett’s esophagus is a precancerous condition caused by chronic heartburn. Years of acid and bile injury refluxing from the stomach into the esophagus results in a change called metaplasia where the normal squamous cells that usually line the esophagus are transformed to columnar cells. This cellular change can only be seen when looking at tissue specimens under a microscope.

Estimates of annual cancer risk range from 0.1 to 3 percent depending on the study. The risk overall is around 30x higher than the normal population. However, the absolute risk of esophageal cancer from Barrett’s is low.

Dysplasia is probably the most studied marker of cancer risk.

There are several levels of dysplasia:

While the rate of cancer is relatively low, esophageal cancer can be difficult to treat and often presents in advanced stages. The management of Barrett’s esophagus continues to be a hotly debated topic in the medical field with experts divided on how best to manage this condition.

Medical management would begin with controlling or eliminating acid reflux, as it is critical to stop acid reflux. Several studies have demonstrated that ongoing acid exposure to Barrett’s leads to further stimulation and the development of dysplasia and cancer. Patients should be placed on a daily PPI (proton pump inhibitor) which can significantly reduce acid production in the stomach and injury to the esophagus. It is important to note that heartburn and acid reflux may be silent. If you have Barrett’s esophagus, you should be taking a daily PPI whether you have symptoms or not.

In some cases, patients need to have a surgery to tighten the lower esophageal barrier and reduce the ability of stomach acid to reach the esophagus. These patients typically have large hiatal hernias or for unclear reasons are not responding to anti acid treatment.  To date, studies have not proven that anti-reflux surgery will lower the risk of esophageal cancer, but this surgery is very effective in controlling heartburn.

What is that? Chemoprevention involves taking medicines, herbs, supplements that may have cancer lowering properties. The most studied anti cancer medication would have to be aspirin and NSAIDS. Many studies have shown a benefit to taking daily aspirin with an estimated 40% reduction in esophageal cancer rates in Barrett’s. These anti-inflammatory medications are known to block a particular cell pathway known as COX-2 and their effects might be even greater when given in combination with a statin medication. Statins are used to lower cholesterol. A worthwhile conversation with your medical doctor would include the possibility of your taking these medications to lower esophageal cancer risk.

There are two essential choices when it comes to Barrett’s – long-term monitoring, or early treatment. In patients that are low risk for esophageal cancer – a strategy that includes control of acid reflux using anti acids and periodic check ups may be acceptable. These check ups would include endoscopy with a direct look at the lower esophagus and taking a few samples to look under the microscope. Patients at higher risk for a cancer, might undergo endoscopic resection or endoscopic ablation. Both of the techniques are considered non-surgical and can be performed during an upper endoscopy.

Ablation of Barrett’s is typically achieved throughout he use of a radio-frequency device (RFA) that can safely deliver energy to selectively burn away abnormal mucosa. This device is manufactured by Medtronic and has a very good track record and is used widely. While RFA has a very high rate of achieving total eradication of Barrett’s, there is a significant rate of recurrence during the following 4-5 years. It is suspected that poor control of acid reflux may be the cause. It is critical that patients understand the need for ongoing control of heartburn. In most cases, patients should remain on a daily PPI. 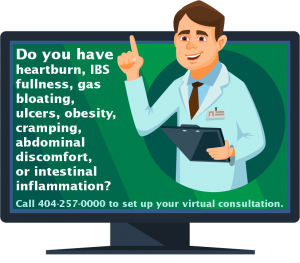